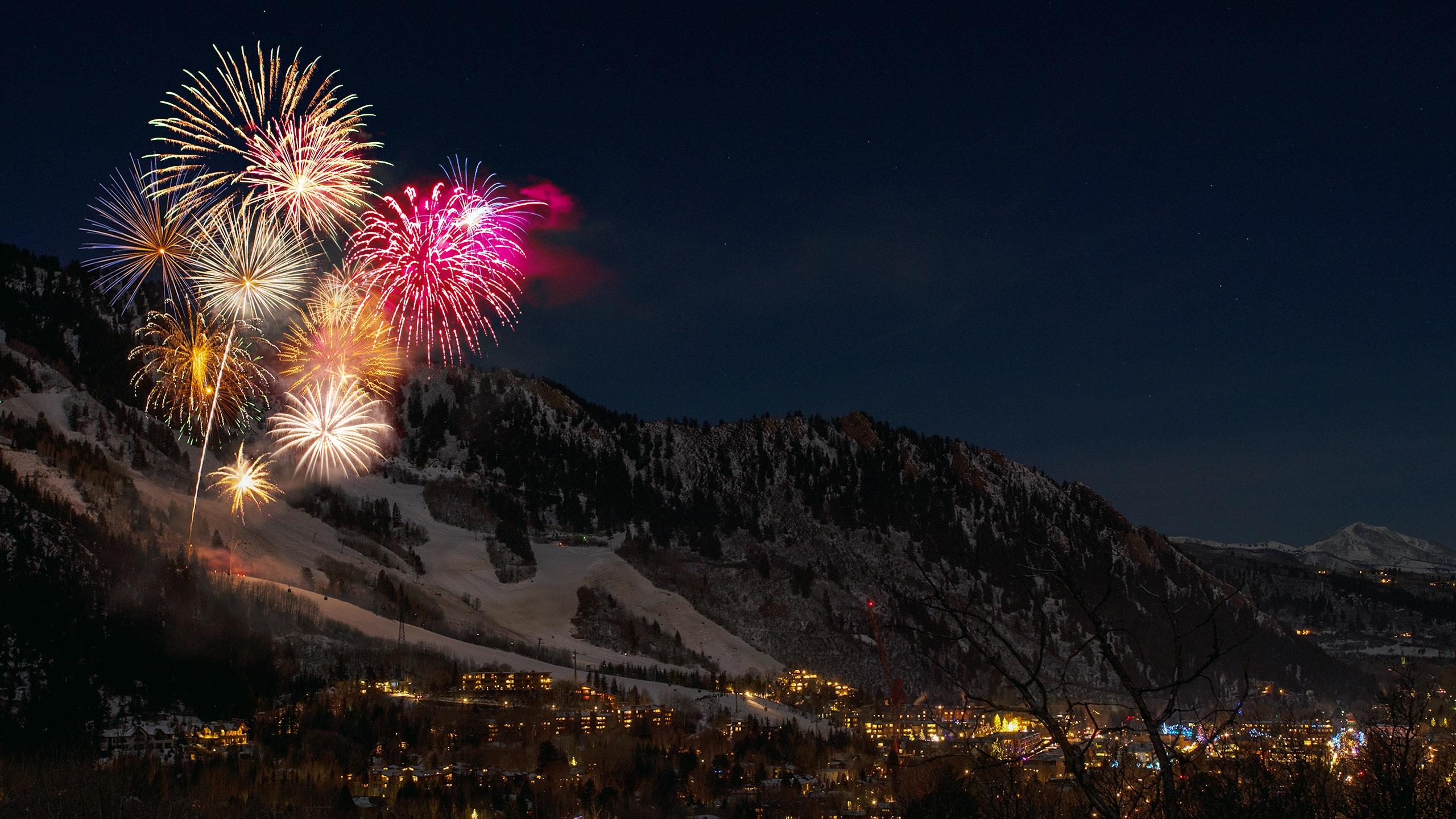 Kick off the year in style with a skiing holiday over New Year's eve. With decent snow and spectacular celebrations on the slopes, a New Year's Eve skiing trip is nothing short of legendary. Here are some of our favourite places to ski in Europe over the New Year.

Get set for one hell of a party! Renowned as one of the liveliest apres-ski scenes in Austria (and that's saying a lot), Ischgl knows how to ring in the New Year. Celebrations begin on the slopes mid-afternoon and carry on way into the early hours of the morning. The resort is big on fireworks, too, with loads of displays lighting up the night sky. And with live music and DJs belting out banging beats around every corner, you'll be dancing your way into January in style. As for the skiing? Well, that also packs a hefty punch. With plenty of runs sitting above 2000 metres and heaps of snow cannons, there's plenty of white stuff to shred at this time of year.

Start the new year as you mean to go on with a skiing holiday in Kitzbühel. As night falls on New Year's eve, the streets come alive with a light show featuring a colourful mix of street artists, and torchlight processions kick off the celebrations on the slopes. As the clock strikes midnight, fireworks whoosh, whistle and whirl over the snowy mountains and light up the sky with fiery bursts of colour. And that's not all. Dance the night away to live music and line up shots of schnapps for a party to remember! Prost!

Not only does Livigno offer fantastic snowsure skiing for everyone in the group, but it is also a swell place to celebrate the New Year. Lively apres bars play host to quality DJs who will have you bopping in your ski boots all night. And the street bonfires will keep you warm too! Hungry? There are some fantastic foodie places to set you up for a big celebration. Meet friends for a feast of delicious woodfired Italian pizza, then head out for cocktails during the countdown to midnight.

If you're short on time but want a mini New Year's ski trip, Italy's Sauze d'Oulx is only an hour's drive from Turin airport. Perfect for a quick getaway before the end of the year! And you don't even need a big budget. Everything from lift passes and ski lessons to food and accommodation tends to be lighter on the wallet than nearby French and Swiss resorts. Happy days! Torchlight processions on New Year's Eve get the party going, and fireworks mark the stroke of midnight. Want to make New Year's Day extra special? Shred some off-piste powder on a heli-skiing tour. Now you're talking!

St Anton is renowned as a hardcore party resort at the best of times. So you can only imagine the supersized scale of the festivities over New Year. Bring. It. On! As midnight draws closer, partygoers flood the streets and countdown the seconds to New year before letting loose and partying all night to live music and DJs. If you can drag yourself out of bed on New Year's Day, St Anton gives you access to Alberg, Austria's largest linked skiing area. With oodles of intermediate runs to explore and some of the world's best off-piste, this is an epic way to kick off the new year.

When it comes to seeing the New Year in on snowy mountains, Tignes ski resort in France is hard to beat. From live DJs mixing up some pumping beats in slope-side mountain huts to bars serving up zesty cocktails and upbeat dance tunes, this is undoubtedly one party you won't wanna miss! Santé! Plus, the fireworks display is usually on point. Out on the pistes, snowsure freeride terrain promises super fun powder, and over 300km of runs across the Tignes-Val d'Isère area are ready to be explored. Come on, let's go!

It's safe to say that Val d'Isere delivers all the goods when it comes to a New Year skiing holiday; snowsure skiing, legendary apres parties, and a beautiful alpine town. What's not to love? Bars and nightclubs lay on extra special celebrations - be sure to book your ticket in advance. And as the countdown to midnight begins, everyone gathers in the town centre to cheer, and pop open some champers. Bonne année! Aside from the partying, there's also some epic skiing to be enjoyed. Explore over 300km of pistes, mostly above 2,300m, and drop in on some peachy off-piste powder. Send it!

The New Year celebrations in Italy's Val Gardena are usually a multiple-day affair. From daring ski instructor shows and pumping DJ sets to incredible firework displays, there's so much to see and do. The setting is pretty eye-catching, too. The Dolomites' UNESCO-listed peaks tower over the resort, and pristine pistes run through picturesque valleys. As one of the best places to access the legendary 40km Dolomiti Superski circuit, why not take on the challenge of the Sellaronda circuit on New Year's Day? Alternatively, enjoy a more relaxing start to the year with a long lunch at one of many mountain restaurants.

If it's good enough for the rich and famous, it's good enough for us! On New Year's Eve, Verbier turns up the apres ski vibe with bars spilling out onto the streets, world-class DJs revving up the celebrations, and fireworks exploding overhead. Swig champers from the bottle and party hard til midnight and beyond. But make sure you save some energy for skiing, too. With the 4-Valley ski area on your doorstep, there's over 400km of pistes to enjoy. Dial in your flow and carve up those mountains. Will it be some challenging reds or gnarly freeride action?

Imagine seeing in the New Year amongst charming wooden chalets and cobbled streets with the mighty Matterhorn as a stunning backdrop. The romantic setting of Zermatt makes for a super special celebration. Gather in the church square to count down to midnight and soak up the electric atmosphere with live music, outdoor bars and fireworks. Fancy something more lively? Head to one of Zermatt's many bars to join the party. On New Year's Day, intermediate skiers are spoilt for choice with reams of linked runs and snowsure slopes. The freeride terrain is out of this world too.

If you aren't already setting up a WhatsApp group to organise your New Year ski bash, and you need a little more help finding the right spot, give us a ring. It's fair to say New Year ski holidays are an area of Heidi's expertise ...

Best places to go for a half term ski holiday

There is a lot to love about a half term ski holiday. Here are our top 5 ski spots and 5 top tips for half term fun...
Sarah Cramer
12 Dec, 2022
4mins, 23s read
Latest BlogsFamily ski guide

There's nothing like a white Christmas, and while you'll have a great time anywhere you ski at this time of year, some places just do Christmas brilliantly...
Sarah Cramer
6 Dec, 2022
4mins, 11s read
Why book with Heidi?
Flexible
Go where you want, when you want, for as long as you want, from an unbeatable choice of resorts.
Easy
Super-clever tech saves you buckets of time by making it easy to find 'the one', from a mountain of options.
5 star service
Our stellar UK team are here 24/7 to make sure your holiday runs smoothly. Flight cancelled? Booking amendments? We'll sort it.
On the money
From budget to luxury, find an amazing ski holiday whatever your wallet, knowing our ATOL protection means your money is safe.
Trustpilot
Registered in England no. 11346739
63 Queen Square
Bristol
England
BS1 4JZ
email: [email protected]
tel: 0117 457 6000
Booking ConditionsPrivacy policyCookie policyWebsite terms of usePackage Travel Regulations 2018Help Pages
About usContact us
All flight-inclusive holidays sold on Heidi are fully financially protected under the ATOL scheme (ATOL 11456)